We are investigating the regulation of non-coding RNAs including microRNAs (miRNAs) and long non-coding RNAs (lncRNAs) by several hormones. We use a range of techniques to investigate the effect of steroid hormones (estrogen and aldosterone) on miRNA regulation in the kidney, and identify new protein targets that alter ion transport.

1) miRNA knockout/gain-of-function mice and sodium regulation in the kidney.

3) Analysis of DeepSeq/RNASeq data to identify hormonally regulated miRNAs and lncRNAs in the kidney.

6) Role of insulin in miRNA regulation in the distal nephron, links to diabetes. 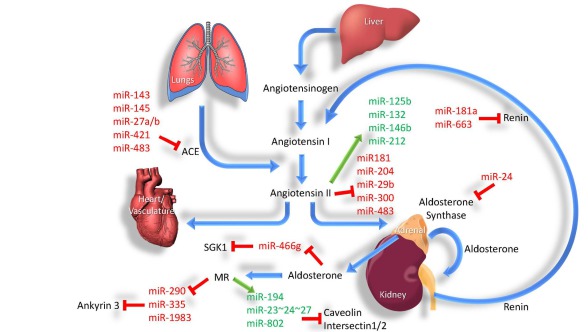 A role for microRNAs (miRs) has been established in growth, development, physiology and disease. Almost 2000 human miRs have been identified, and they act primarily to repress protein expression by binding to the untranslated region of mRNA to prevent protein translation and accelerate mRNA degradation (see schematic below). Far less studied are the long-ncRNAs (lncRNA) > 200bp in length. Several functions have been attributed to lncRNAs. They are able to interact with proteins, DNA and RNA in both the cytoplasm and nucleus to influence gene expression, translation or alter protein function. These studies aim to investigate whether lncRNA expression is regulated by hormonal signals, and if they scavenge smaller RNA species as an additional layer of gene regulation. Studies will focus on the idea that lncRNAs can act as miR sponges as a modifier of miR function. 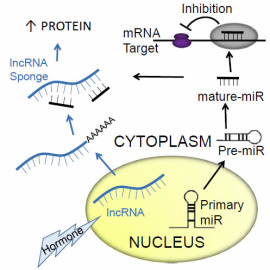 Regulation of the Epithelial Sodium Channel (ENaC) in kidney epithelia

The regulation of ENaC by trafficking and recycling mechanisms is investigated. We use CRISPR edited epithelial cell lines to understand the role of trafficking and scaffold proteins in ENaC trafficking. In the distal kidney nephron upregulation of the channel is associated with volume expansion and hypertension. Sex differnces in blood pressure regulation may be due to cross-talk between the mineralocorticoid and estrogen receptor signaling cascades and are being investigated.

1) The interplay between estrogen and aldosterone signaling in kidney epithelia

3) Disease-linked mutations in ENaC that cause hypertension